Digital Claims are being issued in ever increasing numbers across a wide array of varying industries and Dock has identified recurring and costly points of  failure in the context of data control, validity, and verifiability. The W3C Verifiable Claims Task Force found broad consensus among organizations that issue or consume verifiable claims and experts that have participated in the identity and verifiable claims space for over a decade – a clear need exists for user-centric and privacy-enhancing standards for both expressing and transacting verifiable claims [1].

By 2020, leading researchers predict that 40% of data science tasks will be automated, 25% of large organizations will be either sellers or buyers of data, and companies that are digitally trustworthy will generate 20% more online profit than those who are not [2]. In order for Digital Claims to be useful to both primary and secondary recipients, especially in machine-to-machine processing, interoperability and trustless verification are inherently necessary for widespread, frictionless claims sharing and validation.

By 2025, IDC predicts that the Global Datasphere will grow to 175 Zettabytes, roughly 430% percent growth from 2018, and that due to the infusion of data into our business workflows and our personal streams of life nearly 30% of that Datasphere will be real-time [3]. Through the enablement of anchored immutable data references on blockchains at scale, Dock aims to vastly improve zero-trust validation of data ownership, integrity, timeliness and validity for empowering data owners and validators alike.

Fun Fact: Do you know how big 175 Zettabytes really is? If you have an average internet speed in the United States, it would only take you approximately 1.8 billion years to download the entire predicted 2025 Global Datasphere.

The Web3 Foundation is on a mission to develop a fully decentralized web and is the primary steward and facilitator of Polkadot. Through research and grants, Web3 is building an inclusive set of protocols to provide building blocks for makers of decentralized applications and funding development work that drives improvement and adoption of those protocols. At Dock, we share the Web3 Foundation’s belief in a future where users are in control of their own identity, data, and destiny.

In July, after the conclusion of DGP-2, the decision was made to move the development of the Dock Network to Polkadot. Shortly after this decision, Dock applied for a grant from the Web3 Foundation for the development of a decentralized application for Verifiable Claims built on the Substrate toolset within the Polkadot  ecosystem. The Web3 Foundation announced Dock as a Wave Three grant recipient in August, and as of September our team is laying down the foundations of the new solution for the Dock Network.

The Dock solution operates in the emerging Polkadot interchain ecosystem. We have chosen a potentially nontrivial evolutionary path for the Dock Network, therefore due to the underlying interchain properties as well as the nascent state of the ecosystem at large, the consensus mechanism may change drastically when the Polkadot relay chain is available and slotting is economically feasible. For starters, Dock will launch an experimental solochain built on Substrate with Proof of Authority consensus.

Today, we are building out the foundations of three critical pillars of the Dock Network that we hope to have available by the end of the year.

The first is the integration of Substrate Core modules into Dock’s own Proof of Authority base chain for two ERC-20 type tokens: a representation of the DOCK utility token and a proxy token acting as a (temporary) stablecoin for payment purposes. A deeper dive in to our research on Dock Network token economics, potential Ethereum bridging and payment mechanisms in the greater Polkadot ecosystem, and intrinsic gas requirements will spawn a new technical article series in the coming months.

The second is a runtime module responsible for the management of the entire job request, acceptance, fulfillment and verification workflow. This runtime module will process job requests, fire off events for issuing engines and requestors, accept and award bids, and verify job requests from submission to completion.

The third is the reference implementation for the Verifiable Claims Engine that issues standards-compliant, blockchain-anchored claims references in response to job requests. The core engine will include event listeners, bidding responses utilizing ERC-20 type proxy tokens, and job fulfillment starting on Ethereum.

Dock is continually monitoring system and application level solutions in the Polkadot ecosystem that are currently under heavy active development, evaluating for potential “point” solutions to be utilized by the Dock Network (e.g. Zerochain for privacy or Edgeware for contract deployment).

Our goal is to release a regular cadence of articles in the coming months that dive deeper in to the technical details, architecture and design of the Dock Network as a whole. Some of these topics include token economics in a two-token system, the Dock blockchain consensus evolution, our Verifiable Claims Engine reference implementation as a dApp and potential alternatives, the Decentralized Autonomous Organization that will steward the network in to the future, and more! Drop us a note in telegram or our community forums and let us know if you have any content requests.

We are looking to add one more developer to Dock to continue to strengthen our core team. If your game is Rust and Wasm (Substrate a +++Bonus), please contact us at jobs@dock.io.

Additionally, we are actively seeking contributors and advisors with interest in the Dock Network and experience in any of the areas below, please reach out to us via any of our community channels or email community@dock.io.

As Dock continues moving toward complete decentralization we're excited to share a significant update that's been in the making for awhile. Following through on our previous commitment to the community, we are proud to announce that Dock is now fully open source! 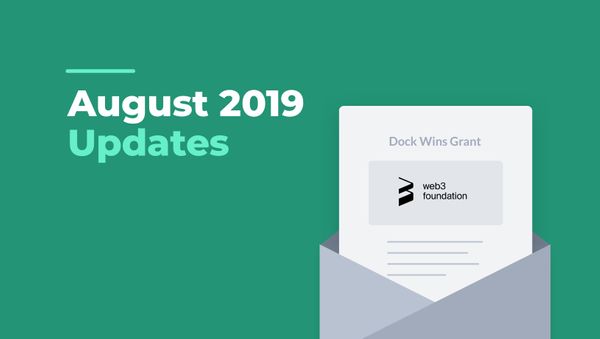 As the month of August ends we are excited to share significant updates about the Dock Network and our progress towards enabling an internet of trust through verifiable digital credentials. Our priority has been completing the milestones outlined in our grant from the Web3 Foundation.