Two weeks ago, a huge microchip vulnerability was discovered for intel processing chips. This vulnerability is called the “Meltdown.”

Meltdown exploits hardware vulnerabilities of Intel processors which ultimately can lead to a leak of passwords and other sensitive data. This means effectively every processor of all computers in the world since 1995 (except Intel Itanium/Intel Atom before 2013 and AMD) is potentially affected.

Watch the Meltdown exploit live in the video below.

Now most professional networking platforms utilize centralized services to host their data because it’s expensive to host it themselves. However this is a problem in light of the Meltdown because all cloud hosting platforms, such as Amazon Web Services or Microsoft’s Cloud Solution Provider program, are also vulnerable to this attack. Therefore, all the information stored on these hosting platforms are at risk of being exposed. This means it’s possible that all your passwords, personal information, and private documents could be leaked.

Thankfully, various dev teams have worked around the clock to provide patches to function as a stop-gap solution to this problem:

“There are patches against Meltdown for Linux ( KPTI (formerly KAISER)), Windows, and OS X. There is also work to harden software against future exploitation of Spectre, respectively to patch software after exploitation through Spectre ( LLVM patch, ARM speculation barrier header).” -Taken from https://meltdownattack.com/

Dock.io will host your private information on the InterPlanetary File System(IPFS), a distributed web platform. This is advantageous because there is not single point of failure. By connecting computers with the same system of files via nodes, IPFS removes the need for websites to have a central origin server. Rather than searching for servers, you are actually searching for the content itself which has been distributed across the network.

Although IPFS is also vulnerable to the Meltdown attack because many of the nodes on the network are using Intel processors, nodes running AMD would not be. This is the power of a distributed web platform. Rather than relying on one centralized service, you rely on the entire network.

However here at Dock.io, we believe that entrusting our users data to hosting platforms (even if it is with IPFS) isn’t good enough. In light of this, your information will be automatically encrypted in IPFS for an added layer of security which you would be able to verify as it is open-source. That means even if your private information was leaked through the Meltdown attack, it would be unrecognizable.

Not only that, but only you can decrypt your personal information. Dock.io will provide you a private key that will enable you to choose who you give access to your data. This empowers users and puts them back in control.

In this way, Dock.io emphasizes ownership, responsibility, and privacy of its users by securely storing encrypted user information in IPFS. 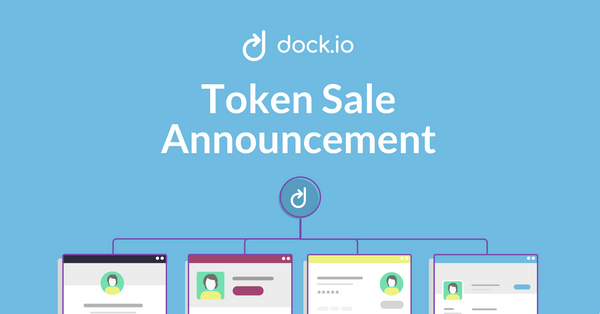 I want to start by thanking everyone in the community who has been active and engaging since we announced the project. Response has been overwhelmingly positive and the entireteam is very appreciative. We are happy to announce the DOCK token sale! Token sale date: February 21st Whitelist date

We are excited to share early growth metrics with the community! The dock.io app(alpha) is growing by more than 3k new users a day Our Telegram group is over 9.5k Considering we have yet to announce our token sale, and the app we released is very much what we consider “alpha”