On March 17, a whistleblower revealed that Cambridge Analytica compiled over 87 million Facebook profiles for Trump’s presidential campaign in order to target American voters during the election. This information was then used to create a software program to predict and influence individual voters at the ballot box through targeted advertisements:

“We exploited Facebook to harvest millions of people’s profiles. And built models to exploit what we knew about them and target their inner demons. That was the basis the entire company was built on.” -Christopher Wylie from Cambridge University

What is surprising is that this occurred back in 2015. This means that Facebook knew about it and have only take limited steps to secure the stolen private information and recover their data. What’s worse is that Facebook has recently confirmed that they have been scraping private cellphone information for years from Android users.

The severity of what Facebook has done and allowed should not be understated. This is a complete violation of people’s privacy, especially as these actions were done without consent. Facebook had a responsibility to protect their users and failed.

In fact, these events illuminate why data privacy is so important. Without it, our personal information can be used to affect events on a national level. The fact that 50 million accounts were used to influence a presidential election is a reality I personally never would have dreamed of.

“Privacy is not secrecy…Privacy is the power to selectively reveal oneself to the world.” -Cypherpunk Manifesto

There is no greater example of this than what we have seen with Facebook. Privacy is a method of protection. It’s a way to prevent others from using our personal data to control or manipulate. In the physical world, the information we share only exists within the confines of conversations or face to face interactions. Personal interactions also allow us to build a level of relationship and trust to determine whether or not we’re comfortable sharing. But once we do, access to it disappears as soon as it is revealed.

However in the digital world, once it is uploaded onto the internet it is permanently made available...depending on the permissions of the platform. This is why we believe data privacy should not be an option but a fundamental right and is taking the necessary steps to make data privacy available to all those who use our protocol.

dock.io is committed to encrypting your data in such a way that it can only be decrypted by a private key which only you have access to. Additionally, our protocol will allow you to selectively choose which apps are able to access your personal information in order to give you further control over your data privacy; something Facebook is now retroactively implementing.

In this way, we hope to build a better future. One that facilitates innovation by incentivizing the proper sharing of information while simultaneously ensuring your data privacy. It’s time that we started creating protocols that reflect the realities of living in a digital world. One that acknowledged data permanence and the same protection afforded online as in the physical world. Come learn more about how we plan to do so by reading our whitepaper or joining the following communities:

I’m excited to share progress on the dock.io network as well as other updates to provide insight on how well things are going. First, I wanted to address some feedback about my participation in the community. As you’ll see from this article, things have been progressing very quickly. Among many 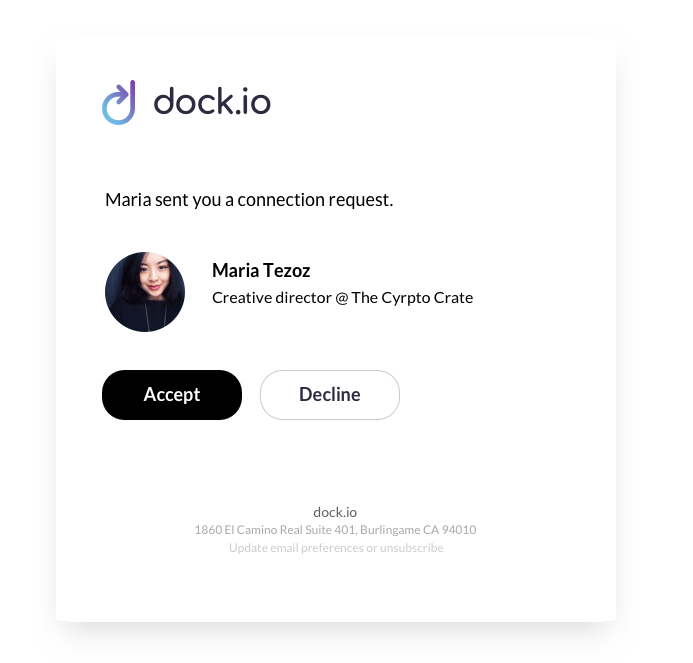 The dock.io team has been working hard on a few different efforts. Here are a few of the things that we have been working on over the last couple of weeks. Redesigned Web Pages We are proud to present our updated web page designs which describe our vision for dock.io. With these updated pages we are