The word ‘Tokensale’ is either extremely lucrative or extremely ludicrous depending on whom you are asking. The sheer pace at which it has caught the public eye is unprecedented amongst all financial terms in the history of the world. To put in perspective the magnitude of this, there are some statistics furnished by icodata.io which are massive to say the least.

ERC stands for ‘Ethereum Request for Comments’ and this is an official protocol for proposing improvements to the Ethereum network. The ‘20’ is the unique proposal ID number.

ERC20 defines a set of rules which need to be met in order for a token to be accepted and called as an ERC20 Token. So, these particular tokens empower developers of all types to accurately predict how new tokens will function within the larger Ethereum system since these rules are required to interact with each other on the Ethereum Network.

According to etherscan.io, the Ethereum Block explorer, there are a total of 37453 Erc20 Token Contracts in existence now and this number is increasing by the minute. It means that there are more than 37,000 tokens now which are piggybacking on the Ethereum Network, hosted by Ethereum addresses and sent by Ethereum Transactions.

Since the ERC20 tokens are built atop Ethereum, they are programmable tokens. The potential of their customization is endless. The use cases of ERC20 tokens are significant and varied according to the token’s needs. The Dock token also has a multitude of applications built on the Ethereum network. Some of the important use cases of Dock and why ERC20 makes the most sense is as follows:-

1) It connects the User Data across the web

Today, user data powers almost every consumer facing app on the web. In a utopian world, the apps using your data must communicate and interact with each other solving the problem of multiplicity of data and eliminates the process of manual migration of data. So, the Dock.io protocol solves this problem as an open network bringing about a revolution on how apps communicate with each other.

3) Accessing, Sharing and ensuring the Quality of Data

By Design, the tokens have a functional necessity in terms of accessing, sharing and ensuring the quality of data.

a) Applications use the Dock tokens when users want to access data on their platform.

b) Applications are rewarded with Dock tokens when users create new data to share via the Dock protocol.

With all of these advantages of the ERC20 token and more, they are averse to lesser amounts of risk, increased uniformity, reduced complexity, and enhanced liquidity of the Dock tokens which prompted the core team to invest in the ERC-20 as it is a crucial aspect of Ethereum now and is going to be a big part of how it will be shaped in the future.

We‘re a few days away from the public sale and we are blown away with the support and overwhelming interest from our community. Below are full details of the token sale. Be aware of scams— Please be on high alert for fake emails, websites and Telegram impersonators. Always confirm you are on the 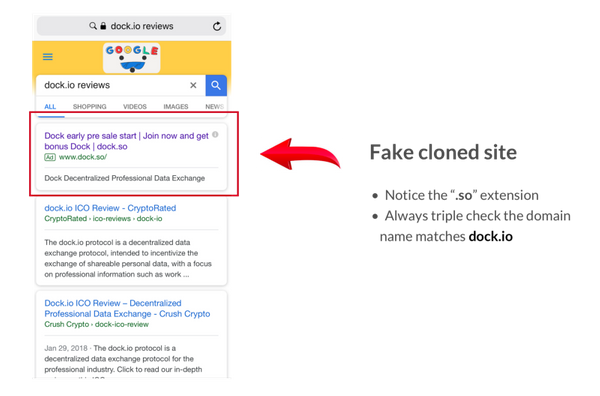 As with all token sales, the larger the following, the more attempts from hackers and scammers to steal money from community members. I created a quick video to share thoughts and tips on security. Hopefully you find this is helpful not only for our token sale, but any you plan on participating in.